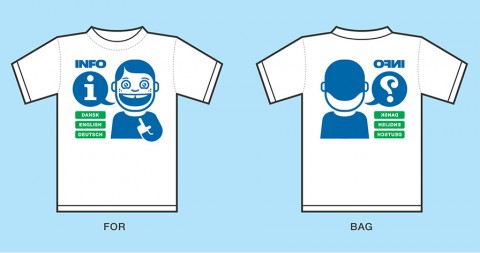 Front and back of the t-shirt.

Some random sketch play. I like to throw dirty raster masks on clean vector shapes (for those of you who didn't know that already, hehe).

A couple of weeks ago, I was hired by Assens Udviklingsraad to make some tourist information t-shirts for the staff to wear during the summer season. I decided to take a humoristic approach to the project, and made this kind of nerdy character – a “do goodie” if you will.I ended up going with a unisex character instead of my original idea of making two separate versions: one with a female character for the female staff and a male character for the male staff.

Actually I haven’t gotten feedback on these yet, so I’m pretty excited about tomorrow. What do you guys think?

This entry was posted in Grafisk Design. Bookmark the permalink.