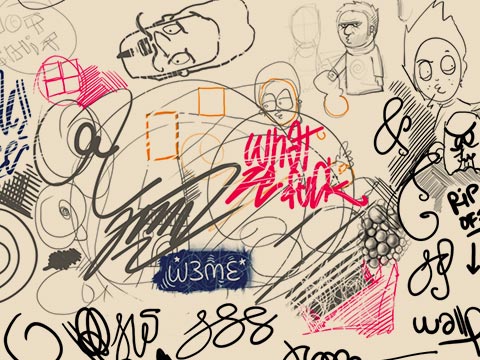 I’ve had my Wacom Intuos4 Medium board for about a week now, so I thought it would be appropriate to serve a little review at this point. It’s not going to be an in-depth review, but I still think it will be interesting for creative minded people to read. Here goes:

I upgraded from the previous model – the Intuos3 A5 tablet, so I was really excited to experience how this new model would look and feel in use. The first thing I noticed when unboxing the thing was how beautiful the packaging was. Did anyone say Apple? :) The “Medium” tablet itself appears to be thinner and lighter than the Intuos3 A5, and of course the color scheme is now black instead of blue, which I totally love. You can’t go wrong with black, and it totally matches my MacBook Pro.

I was really happy to see that Wacom chose not to have the cable permanently attached to the tablet. Now you can detach it, which is really nice when transporting the tablet. The cable is just a basic camera USB cable, so if you think the bundled cable is a bit too long for your liking, you can just use the shorter cable from your digital camera / card reader. I was able to use my shorter USB cable from my card reader with no issues whatsoever.

The surface of the Intuos4 feels more “resistant” than the Intuos3. It’s got a more tactile feel to it which makes it a lot easier (at least for me) to control the line that I’m drawing. The Intuos3 was very slippery and plastic-like, which meant that my hand couldn’t slide easily if it became slightly moist (especially in the summertime). I’m happy to say that this is no longer an issue with the Intuos4! The new surface fascinates me. It’s a lot more similar to paper now. Maybe it’s the specific tip that I’m using? (I’m just using the standard tip that’s in the pen right now – it comes with 10 extra tips inside the pen holder). As for the sound of the pen when moving it across the surface, it sounds exactly as if I’m using a marker on real paper. Kind of funny actually. The eraser even feels like a real rubber eraser against the surface.

The pen is black like the tablet and the rubber “sticks” nicely to the hand for superb control. Nice. Shape is basically the same as the previous pen. Other than that I don’t know what to say about the pen, so I’ll leave it at that. It bothers me though that Wacom has excluded a mouse with the tablet. Thumbs down to that.

I must admit that I’m not really using the customizable buttons on the side of the tablet that much. I guess it depends on what workflow you’re used to, but I would imagine that they’d come in very handy, if I want to completely leave the keyboard alone and draw with the tablet on my lap. The buttons are really cool though, and next to them are OLED icons / text of what each of the buttons are programmed to do. It looks pretty neat in low light – I wish the Wacom logo would illuminate in the same way. The Apple style TouchWheel works really well, and can be programmed to 4 different functions. The first function on my TouchWheel is set to zoom in / out (in Photoshop), which is just a basic scroll in Finder / browsers. The second and third TouchWheel functions have not yet been set. The fourth is set to “Rotate View Tool” (Photoshop). Something that’s been bothering me when using the Rotate View Tool in Photoshop is that when you rotate it back to zero degrees in angle, it’s still not back in the original and “unrotated” view mode. The pixels are somehow not quite in place. You can tell when pressing the Reset View button. Try it. This is a bug I really hope Adobe will fix soon! In the meantime I hope that I can assign a button on my tablet to the Reset View button in the submenu to the Rotate View Tool. That would just be sweet. Anyways, back to the review!

Overall I really love this upgrade, the color the feel the output. I really notice the added pressure points when working in Photoshop, and it behaves a lot better than my Intuos3. I can recommend this to anyone who’s either an Illustrator or a Graphic Designer.

This entry was posted in Hardware, Review. Bookmark the permalink.