So, yesterday I called up EsimeX (Evald) to clear out some questions. I wanted to know why they discontinued production of the foldable Joker-bike. Explanation: they found that the majority of their customers went for the non-foldable version, so why bother producing something they don’t want. Fair and square :)

I also asked if it would be possible for them to ship my bike in a different color than its standard blue. Fortunately it is possible, so I’m gonna go with nothing less than OFF WHITE / CREAM :p They need a RAL color code on that one, and I found that by using a Color Converter app on my mac. It’s got the RAL code of 9001 (who would’ve though, hehe).

I did a lot of research on the saddle, and settled for a BROOKS B67 Aged Brown. BROOKS is an English brand with a lot of tradition. Take a look here for more info. This particular saddle has got the right vintage feel to it that I’m looking for. It’s going to look stunning on the bike! I’ve even found a pair of BROOKS handle bars that match.

This is how the bike will hopefully look like when it’s all done: 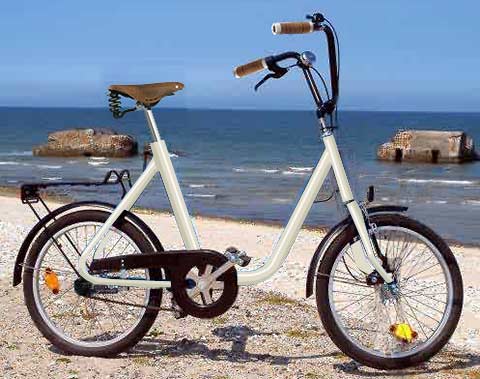 I sure would like the stear to be metallic instead of black though...

This entry was posted in Indkøb, Skitser. Bookmark the permalink.